Senegal – the road to chaos 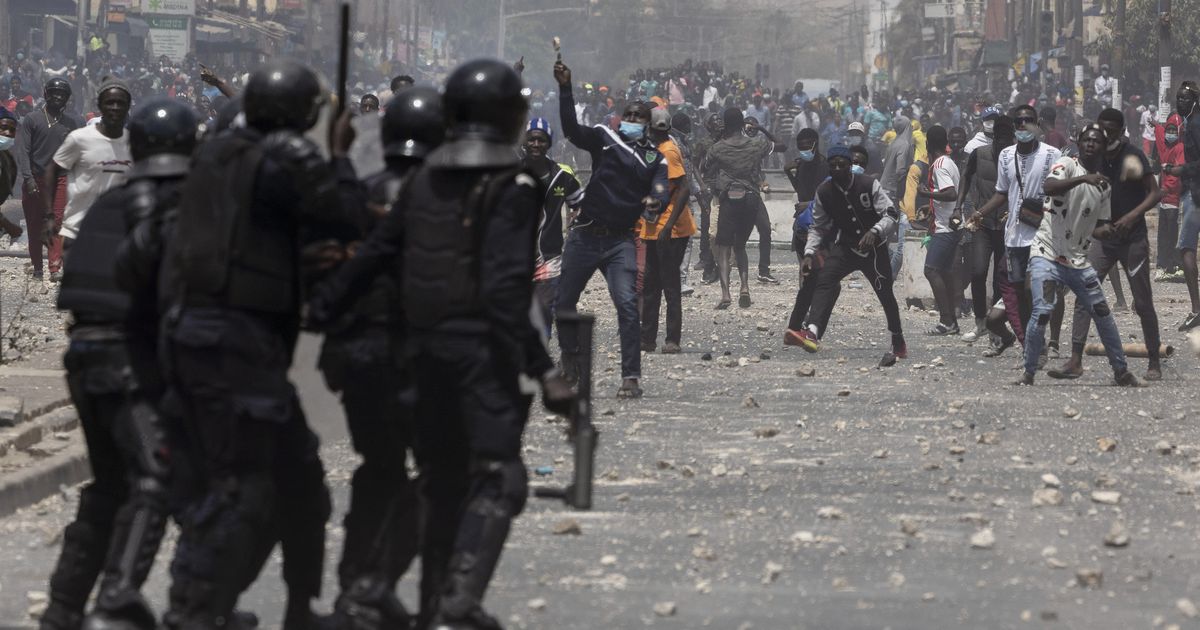 Twitter is ablaze. It doesn’t wait in these circumstances. If all these tweets were audible, it would sound like a giant flock of birds madly screeching in Senegal. The hashtag is #FreeSenegal. Everyone is pointing to a political manipulation of justice in order to remove a political opponent. Between 10 and 13 people died, shot by the police or victims of clashes in the streets. The riots were massive in Dakar, the capital, but also in other regions: Kaolack, Kolda, Ziguinchor, Saint-Louis … Public buildings were ransacked and the homes of several politicians were set on fire. French companies like Auchan or Total were vandalized and sacked by throngs of people.

The arrest of an opposition leader was the pretext for thousands of people across the country to take to the streets. Ever since Ousmane Sonko, leader of the Pastef party, was accused of rape in a massage parlor on January 31, 2021, a rising political tension has gripped the country. Matters escalated when a procedure was invoked to terminate the parliamentary immunity of Sonko, who had entered the national hemicycle in 2017.

Throughout this prosecution, the MP made his arrest difficult and unpopular by publicly refusing to respond to the judicial summons in spite of the decision of the National Assembly to lift his parliamentary immunity. In the meantime, leaked minutes and several private investigations had revealed to public opinion elements that strongly suggest that this accusation of rape against this legitimate candidate for the status of Senegal’s opposition leader is, in fact, a political ambush.

On March 3, when Sonko finally decided to respond to the court’s summons to tell his side of the story, hundreds of young people joined the political leader at his home with the intention of accompanying him to the halls of justice. It was the beginning of a bloody day.

-« I don’t understand how things could degenerate so quickly, » I told the cab driver who dropped me off at Point E on the morning of March 3. His words come back to me distinctly.

-« This is not about Sonko. He is just the spark that ignited the fire. People are angry at Macky Sall. In the last few days, I could hear it from 9 out of 10 people who were sitting where you are sitting right now. »

His argument is tenable. It’s hard to believe that people are robbing Auchan because of an injustice against a political leader. Not even the Covid-19 crisis can explain or justify the protests and targeted looting of the past few days. The roots of the violence are intrinsically linked to the poor performance of our democracy.

Wednesday, March 3. It is mid-day. The riots continue outside. As I write this paragraph in an open space next to Cheikh Anta Diop University, I hear flashbangs exploding. They are frightening. 1, 2, 3, 7, 15… I am counting them as my fingers type on the keyboard. The resilience of the students fighting against the police is impressive.

In recent years, several civil society organizations have warned of a growing loss of control over the country’s democratic gains.

In the days following MP Sonko’s arrest, the violence reached a point that will go down in the annals of the country’s political history. This is a lot to say for Senegal, which is certainly a country known for security and stability, but which has long-standing traditions of political and union protest dating back to the colonial period. For my generation, the sting from the terrible repression from the forces of law and order when demonstrators opposed Abdoulaye Wade’s maneuverings for power in 2012 is etched on our bodies and minds forever.

The violence and surprise of the popular eruption, in those exceptional moments, tested the capacities of all pillars of stability in our Republic: the sensitizing and rallying power of the religious communities, the independence and integrity of the justice sector, the professionalism of the armed forces, etc. The latter have spectacularly failed in their mission in recent days. Members of the security forces and men in civilian attire but carrying firearms have killed young people who flaunted their authority. These were not accidents. They were filmed killing unarmed civilians at close range.

The barbarity of an unbalanced democracy is as deadly as a dictatorship. In recent years, several civil society organizations have warned of a growing loss of control over the country’s democratic gains. In response to these criticisms, but also to correct the lack of prioritization of political governance during his election campaign in 2019, a political commission for national dialogue was set up by Macky Sall following his re-election. The recent protests question the effectiveness of this umpteenth forum for discussion with the executive branch, just as they question the role of the National Assembly, the High Council of Local Authorities, the Youth Council and all the institutions built to enable government of the people by the people and for the people in Senegal.

The political revolt began with the arrest of Ousmane Sonko but, in reality, the revolt took place because the mechanisms of contestation and simple participation in political life in the country of Teranga and Masla are twisted. Ami Collé Dieng, Guy Marius Sagna, Oulèye Mané, Saer Kébé are the names of those artists, activists and citizens who have been imprisoned, intimidated or violated for expressing critical views of the Head of State.

To correct the lack of prioritization of political governance during his election campaign in 2019, a political commission for national dialogue was set up by Macky Sall following his re-election. The recent protests question the effectiveness of this umpteenth forum for discussion with the executive branch

We remember the still painful death of the student Fallou Sène, which reminds us that killing is a systematic recurrence during the movements of popular demonstration against the current regime. In this context where marching, peaceful assembly, and freedom of expression are threatened, and faced with intransigence and violence from the forces of order, the outraged young people did not hesitate to retaliate with the oldest method in the world: violence. Not really a pleasant method, but very accessible.

While the interpretation wars have begun to turn recent events into a political chess game, it is crucial to ask the essential questions at this important moment in the history of our young country. What options are there outside of violence that can sound the alarm for good governance and social and economic justice? Why is it that the Senegalese police force known for its efficiency and courtesy turns into an executioner when it comes to controlling peaceful demonstrations? The danger is to make violence legitimate when there seems to be no other way.

The State has a monopoly on legitimate violence because it has been conferred by the people. If the people no longer recognize its legitimacy because there is a crisis of confidence, the people can then decide to re-appropriate the power of political violence that it has given to its leaders. It cannot take back the weapons, it cannot take back the bullets that the police shoot at the demonstrators. It can, however, take back from the state of Senegal either the legitimacy or its monopoly on legitimate violence on their common territory.

The future of violence

We know what allowed the violence to be so furiously unleashed during the unprecedented protests after the arrest of MP Sonko. We know the roots of the violence. Shortly before Ghana’s independence, Kwame Nkrumah wrote: “I was not blind to the possibility of bribery and corruption in the country among both Europeans and Africans. Things had moved fast, the feeling of power was a new thing: the desire to possess cars, houses and other commodities that were regarded as necessities by the European population in the country, was not unnatural in people who were suddenly made to feel that they were being prepared to take over from those Europeans; and money, the wherewithal to obtain these luxuries, was tempting”.

Why is it that the Senegalese police force known for its efficiency and courtesy turns into an executioner when it comes to controlling peaceful demonstrations? The danger is to make violence legitimate when there seems to be no other way.

Basically, nothing has changed in many African countries since those days. Now more than ever, we live in a « Republic of privileges that profits a happy few » as Rama Salla Dieng puts it. Just like Sonko was a catalyst of frustration against the political manipulation of justice, the difficulties of earning a living during Covid-19 have awakened the frustrations of many in distress. But here again, it is not only about creating jobs, « giving funding to the youth » and chaining development programs that will not be evaluated. Without economic and social justice, let us insist, no lasting peace is guaranteed.

We are unaware of the dangers that await us after such a resounding signal of the weakness of our democracy. Following the intervention of religious leaders, the rally planned for Saturday, March 13, at the “Place de la Nation” was cancelled because of the risks of escalation. It was organized by the Movement for the Defense of Democracy, of which Pastef, the party of Ousmane Sonko, is a member.

It has now been a week since calm returned to Dakar and other theaters of demonstrations. It is a lull. Follow the social networks: the violence that had disappeared from the streets is manifesting outrageously on-line. Frustrations have not dissipated with the rallying speeches from the state, the opposition, civil society and religious leaders. They are simmering elsewhere.

Since Senegal is being held hostage in the political arena, where a partisan state with exaggerated power can dominate, it will be necessary to rely on the maturity of political leaders to avoid leading the country into chaos. One of the best ways to court disaster would be to place the responses to the crisis on a political agenda that serves partisan interests. Unfortunately, the partial reading of recent events by the Head of State and members of the Government, the manipulation of violence by political leaders, and the ineffectiveness of mechanisms for representing the population do not bode well.

Mohamadou Fadel Diop is a Research Officer at WATHI interested in governance, regional integration, interregional cooperation, and EU-Africa relations. With a background in strategy consulting, he is a Dalberg Talent Academy laureate and has served as an advocacy champion for The ONE Campaign in West Africa.